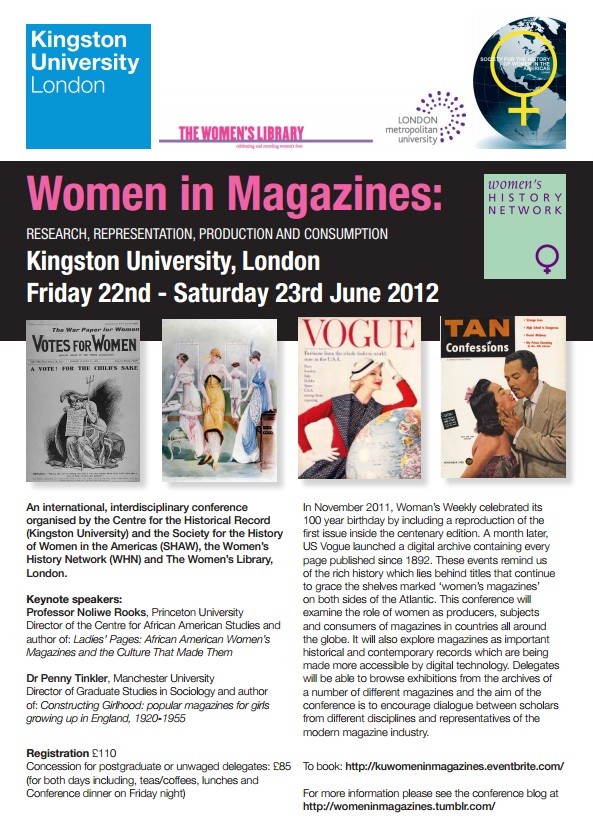 Research activity in the Oxford International Centre for Publishing Studies has grown fast in recent years, and below are some highlights from the last few months. We have a number of new PhD students starting with us this September, as well as a new cohort of students on the MA in Book History and Publishing Culture.

Leander Reeves (Senior Lecturer, Publishing) and Elizabeth Lovegrove (PhD student, Publishing) gave papers at the Women in Magazines Conference held at Kingston University, 22-23 July. Leander’s paper was about ‘The Philosopher, the Magazines, the Glamour Model and her Avatar’ and Liz’s was entitled ‘Chase him till he catches you’: how to get a boyfriend according to Jackie magazine in 1964’.

Lydia Lantzsch (PhD student, Publishing) joined the ‘Bibliography and the Study of Paper’ Summer School run by the Centre for the Study of the Book at the Bodleian Library in July and also attended the UKSG international conference and exhibition held at Glasgow in March.

Jane’s article with Carol Acton (University of Waterloo, Canada) entitled ' "These frightful sights would work havoc with one's brain": Subjective Experience, Trauma and Resilience in the Writings of First World War Medical Personnel', was published in Literature and Medicine, Vol. 30, No. 1 (Spring 2012).

Adrian Bullock’s new book on Book Production came out from Routledge in June.

Angus Phillips, Director of the Oxford International Centre for Publishing Studies, gave a paper at the Fifth International Conference on Information Law and Ethics in Corfu, Greece on 29 June 2012. The conference was held at the Ionian Academy and Angus spoke about ‘The Importance of Intellectual Capital in Publishing’.

Posted by .(JavaScript must be enabled to view this email address) on 24 Sep 2012 around 7am