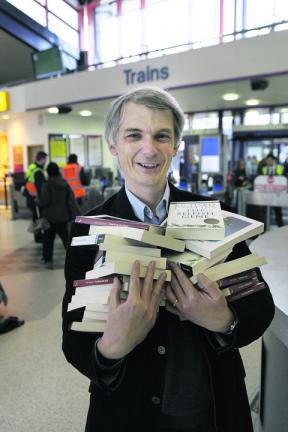 Oxford has now formally launched its bid to become World Book Capital in 2014. The title is an annual award granted by UNESCO which acknowledges the best year-long programme proposed by a city to promote books and foster reading.

Oxford has unparalleled resources and a world-renowned economy in place to support a programme of this kind. There are probably more major culturally diverse authors based in or around Oxford than in any comparable city in the world. You can read a summary of the city’s bid in the attached document.

One of the partners involved in the bid is Oxford Brookes University, and Angus Phillips, Director of the Oxford International Centre for Publishing Studies, is on the steering committee. There is an Oxford Mail story about the launch here.

The launch coincided with World Book Night, and Angus Phillips also handed out copies of Joe Simpson’s Touching the Void at Oxford rail station. You can read about WBN in Oxford here.

Posted by .(JavaScript must be enabled to view this email address) on 02 May 2012 around 8am