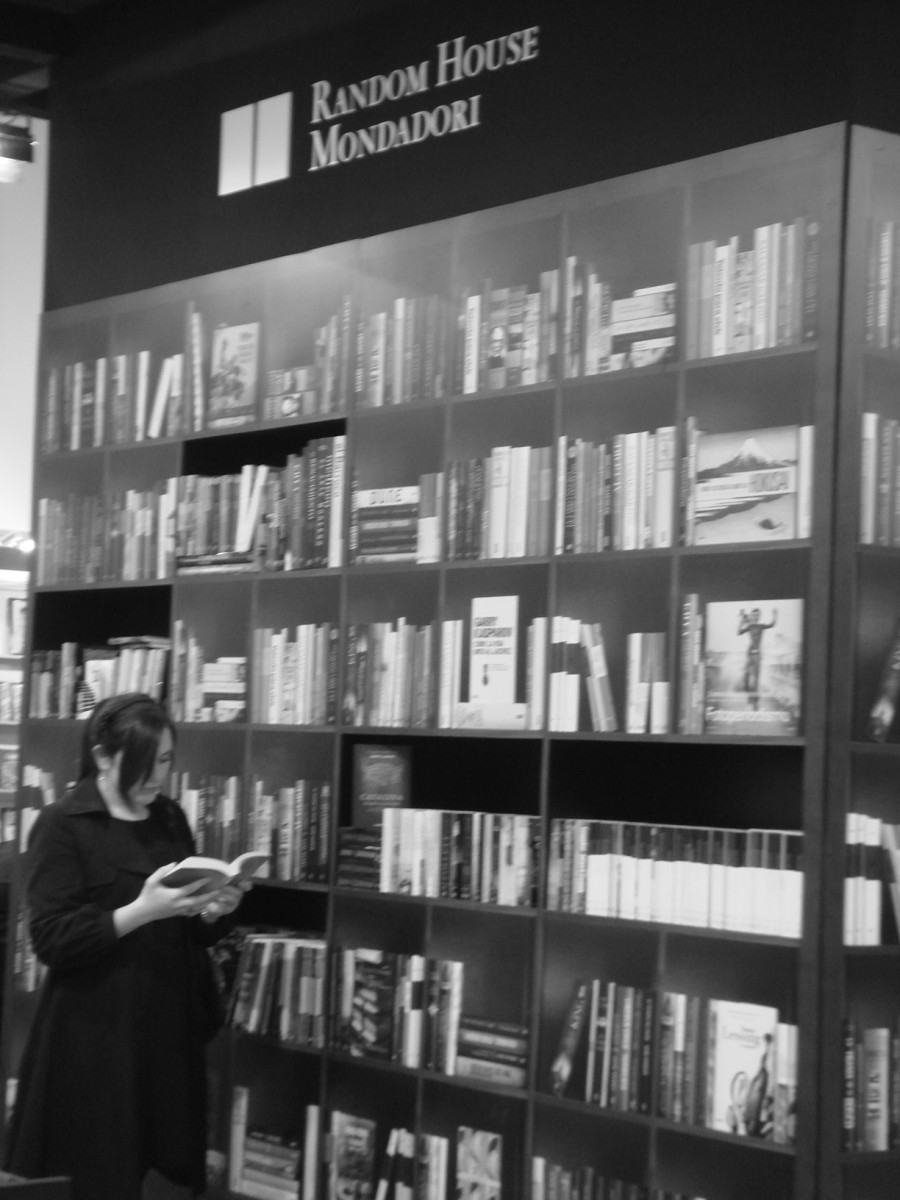 The visit to Frankfurt is a regular field trip for Master's students, who also visit the Bologna and London Book Fairs. We showcase here two pictures of the Fair, taken by Giselle Regus and Nuala O'Reilly from the MA class. Another student, Cathryn Steele, writes of her first visit to Frankfurt:

As I approached, it was almost as if I could smell books on the cool morning air. Everyone on the streets seemed to be walking in the same direction; towards the ‘Frankfurter Buchmesse'. As I reached the collection of huge buildings which housed the book-fair, the streets were lined with book vendors and people handing out leaflets and free gifts. Already loaded with bags and pamphlets, I entered the colossal entrance hall. I followed the crowds of people through the turnstiles and into the long concrete corridors which connected each of the display halls, finding one of the less crowded halls where I could browse comfortably. Enjoying the free herbal tea which was supplied at one of the booths, I wandered among the displays. The people manning the booths seemed happy to answer questions and when I discovered a section which had stacks of books reaching to the ceiling I thought that the mother-ship had picked me up and taken me home. In Britain it is very easy to imagine that very few books are written in other languages, but the volume of works which have not been translated into English yet is one of the main things which impressed me as I strolled through the book-fair.

Many halls and many cups of cinnamon tea later, I had still not seen every display and my feet and shoulders were already beginning to ache. I had to stop frequently and remove some of the less relevant pamphlets from my bags. I was beginning to think that a trolley and a more comfortable pair of shoes would have been a good idea. I drifted through the English language hall, amazed by how many publishers' names I recognised and by how many books with which I was familiar. I made up my mind to return the next day to complete my trip. I needed coffee and some decent food.

The next day I returned to the fair. This time it was open to the general public, so the German halls were very full while the other halls were less crowded and the atmosphere was much more relaxed. I particularly enjoyed the fabulous Hispanic section and returned to browse the rest of the English language hall, picking up a few books at bargain prices. I didn't get time to visit every hall; the book-fair was simply too vast to complete in two days. I returned home that night with sore shoulders and heavy bags, but having had a wonderful day and a great ‘first Frankfurt'!

Posted by .(JavaScript must be enabled to view this email address) on 21 Nov 2008 around 2pm