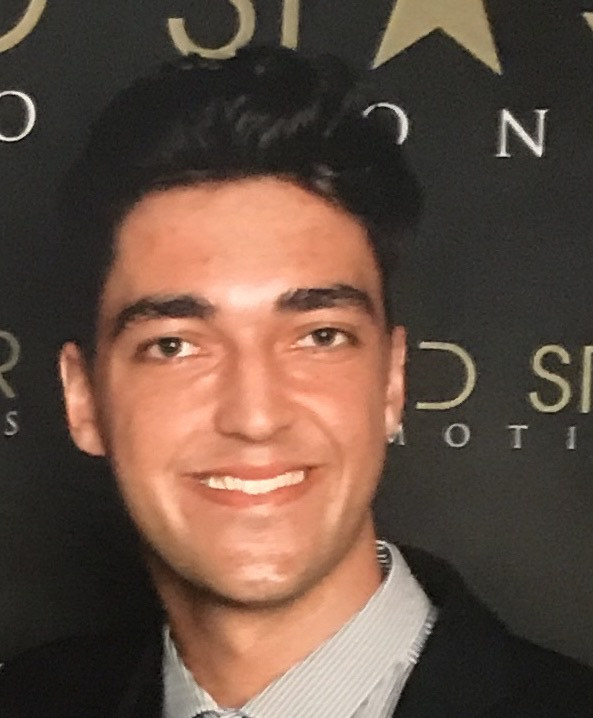 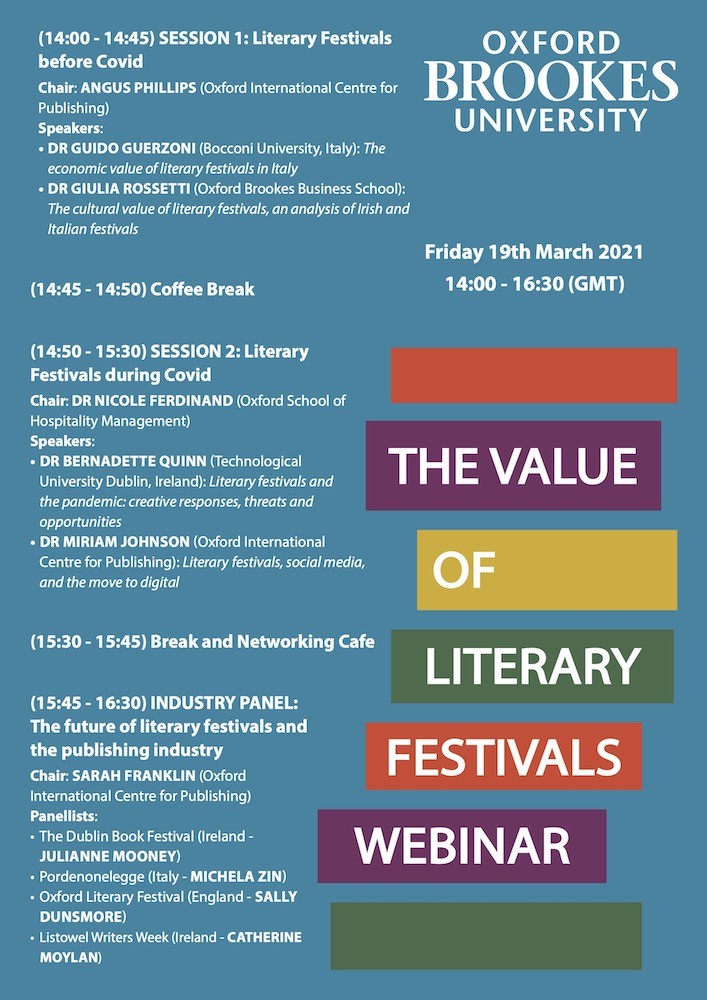 The value of literary festivals - a webinar

On Friday 19 March 2021 OICP, in collaboration with Oxford Brookes Business School, ran an online event, The Value of Literary Festivals. Offering a range of speakers, it gave students, both on the postgraduate and undergraduate courses, the chance to gain a keen understanding of literary festivals and the challenges presented by the global pandemic.

The event kicked off with two talks, first by Dr Guido Guerzoni, from Bocconi University in Italy, and later Dr Giulia Rossetti, from the Business School at Brookes. Chaired by Angus Phillips, the head of the OICP, this focused on the role of literary festivals prior to Covid-19.

Dr Guerzoni looked at the ‘economic value of literary festivals’, specifically in regards to Italy. Among his findings, he reported that from a survey of 109 festivals in 2019, 59% of them were completely free and, on average, they had a budget of €300,000. He then ran the same survey a year later, studying the effects of the pandemic. From 87 festivals, he found that 39% were held for a shorter amount of time (2–3 days) than previously; compared to a figure of 70% for festivals that ran for 3-5 days in pre-Covid times. Moreover, 17% were cancelled, 14% were postponed, and 68% had a reduced budget.

In the second talk, Dr Rossetti analysed the cultural value of literary festivals in Ireland and Italy. She found 11 types of people who attended literary festivals, from supporters to passionate readers to devotees; thereafter she split this between those who acquired more or less cultural capital, as well as attendees who sought specialist skills perhaps through writing classes.  She concluded that literary festivals increased cultural sustainability and that location is a key part of the event experience.

The next session, chaired by Dr Nicole Ferdinand (Oxford School of Hospitality Management), looked further at how literary festivals coped following the pandemic’s outbreak. The first speaker, Dr Bernadette Quinn, from the Technological University Dublin, talked about the ‘creative responses, threats and opportunities’ for literary festivals. In her study, she revealed that over 30 literary events in Ireland were cancelled or postponed, while 20 were moved online. Despite this, she said that there were opportunities available in moving to digital; for instance, as well as fewer time constraints, there are different ways to increase engagement.

Dr Miriam Johnson, from OICP, agreed, stating that the move to online offered literary festivals the chance to tackle inequality of access, be that of race, class, or education. Using examples such as Henley Literary Festival, she showed the innovative ways in which organizations have broadened their following and diversified their output.

The future of literary festivals

In the final session, run by Sarah Franklin, an author as well as lecturer at OICP, she discussed with industry insiders the impact of Covid on literary festivals and the publishing sector. When asked about their challenges, one panellist, Julianne Mooney, Director for Dublin Book Festival, said her main concern was well the festival could function in a pandemic. While she wanted to show their audience that they ‘were alive’, she also had to consider ways to stand out from the crowd of events online.

Sally Dunsmore, Chief Executive of the Oxford Literary Festival, echoed these sentiments, highlighting that they had spent one year preparing but were forced to cancel two weeks before its start. The break away from running the Festival has given them time to focus on their vision. Likewise, Catherine Moylan, Chairperson of Listowel Writers’ Week, spoke about being forced to cancel. After 49 years of running the event, it enabled them to take a closer look at the festival and think of ways it could be improved. They realized its place at the heart of the community, and the closure fostered a sense of solidarity and led to discussions with locals.

Another aspect that was spoken about was the importance of volunteers. Michela Zin, director of the Pordenonelegge.it Foundation which organizes the Pordenonelegge festival in Italy, said volunteer helpers, known as ‘angels’, were a key part of the event. Not only do they learn about the practicalities of literary festivals, it can become a ‘very formative experience’. Sally Dunsmore, from the Oxford Literary Festival, was of the same opinion. She said that she liked having university students volunteer at their event, as they have a ‘can-do attitude which is very infectious’.  While the Festival cannot offer jobs, they are happy to provide references if required.

Edited by .(JavaScript must be enabled to view this email address) on 24 Mar 2021 around 12pm