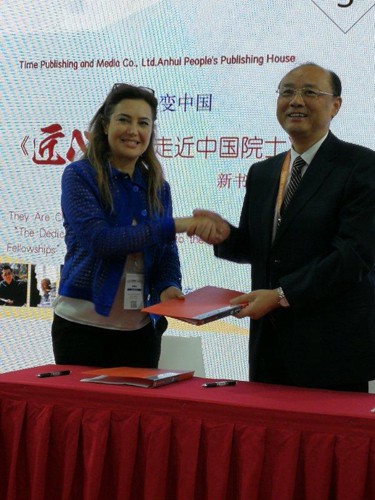 I would like to introduce myself, my name is Lina Chebaro. Currently I’m a first-year distance learning student on the MA Publishing Studies at Oxford Brookes University. In addition to that I am the Copyrights Manager at Arab Scientific Publishers, Inc. (ASP).

This August, I attended Beijing International Book Fair (BIBF) for the third time. Each year I have seen positive growth of the Chinese publishing sector, both in quality of and variety of publications.

My role as a copyrights manager is to take appointments with all our Chinese partners before the fair. At the fair we visit each publishing house stand during the pre-assigned appointment. During the meetings our partners show us their newest tiles (this can be as demos) which they believe are suitable for our market. We ask about the books’ specifications such as page extent, number of words, use of colour images and if an English translation exists. We then negotiate the book’s advance and percentage of royalty on the retail price of the sold books. As part of the negotiations we can show them printed copies of Chinese books translated to Arabic and published by ASP. Furthermore, we search for new books that we like at the fair and exchange our business cards to discuss later future cooperation.

As you can see from the picture, there might also be signing ceremonies at the fair too.

How did our visits to Beijing Book Fair begin? It was in 2007 that my father Bassam Chebaro (president at ASP) first attended the fair and started acquiring Arabic rights. Commencing with Arabic rights for five titles from Sinolingua’s "Wise Men Talking” series . At that time, Han Hui, GU Jun was the lady to discuss the terms with him (and the only lady my father found at the fair who could speak English). ASP signed its next Arabic rights acquirement in year 2012 in a deal with with Foreign Language Press for a title named Foot Therapy for Common Diseases.

Ten years on, ASP has acquired and translated over 110 titles and has many more in production. All of this is undertaken with the help of the so called ‘The Belt and Road Initiative’. The Silk Road Economic Belt and the 21st-century Maritime Silk Road is a development strategy adopted by the Chinese government. Through these initiatives subsidy grants are given to translate titles from Chinese to Arabic. Thus by publishing these books in the Arabic language readers in the Mena Area would understand more about the Chinese culture.

A some quick facts about Arab Scientific Publishers Inc

For any publishers interested in attending Beijing International Book Fair the Confucius Institute at Oxford Brookes offers a range of Chinese language and culture classes aimed at students and the general public throughout the year, starting in September/October. Contact .(JavaScript must be enabled to view this email address) for more information. They also offer customised business classes for local enterprises.

Edited by .(JavaScript must be enabled to view this email address) on 05 Oct 2018 around 4pm