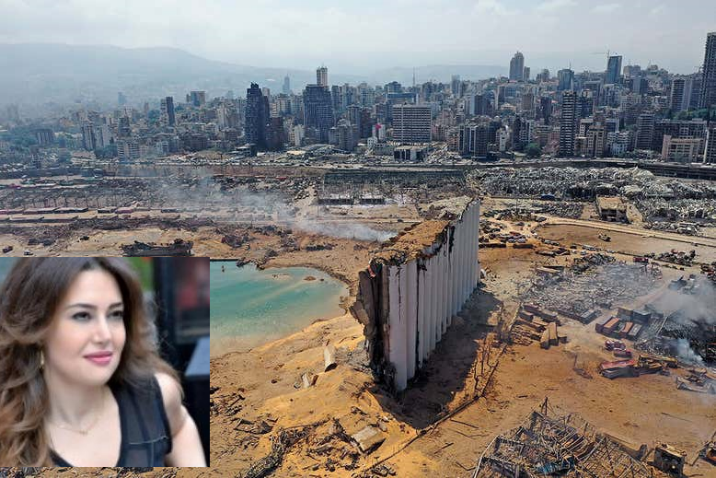 Notes from Beirut where the media is under threat

Lina Chebaro, who lives in Beirut, was caught in the explosion which devastated the Lebanese city on 4 August 2020. In this blog post, MA student Lina reflects on the unfolding situation in Lebanon, and the threats faced by publishers and journalists in the region.

On 4 August 2020, an explosion registering 3.3 on seismographic scales and which was heard and felt more than a 100 miles away in Cyprus, rocked the city of Beirut in Lebanon and caused the deaths of over 200 people. There were 7000 injured, and the blast destroyed 20,000 residences and rendered 300,000 people homeless in a matter of seconds.[1] Though investigations have not reached an official verdict yet on the reasons for the explosion, it has been attributed to the improper storage of 2,750 tons of ammonium nitrate. All government officials denied knowledge of the existence of the chemicals.[2] On 8 August 2020, after clashing with government security forces, angry demonstrators looking for answers to this crime and many other crimes, forced the militia-imposed Lebanese Prime Minister and his cabinets to submit their resignation.[3]

The Beirut blast was the latest in a series of unfortunate incident that Lebanese citizens have had to deal with since October 2019. On 17 October, thousands of Lebanese took to the streets in protests against the additional US $6 government-imposed tax on the messaging service provider WhatsApp.[4] For the first time in 40 years, Lebanese put their political, sectarian, and religious differences aside because of the deteriorating economic situation, and confronted a government - imposed by an aggressive regional power and supported by a local armed terrorist militia - through a series of marches, protests and peaceful demonstrations which eventually turned violent.

This day, dubbed the October 17 Revolution, is considered a landmark in modern Lebanese history. It was the day most unarmed Lebanese broke the fear barrier and confronted an entrenched, regionally-corrupt, imposed political system which is backed by a notorious terrorist organization.[5] Needless to say, the system fought back aggressively using all means possible. In order to subdue the population, the banking industry, which is owned mostly by politicians (mostly warlords from the Lebanese civil war era) or their affiliates, confiscated the Lebanese people’s dollar accounts and credit cards.[6] This caused the Lebanese Pound (L.L) to lose 70 per cent of its value against the US dollar,[7] and caused prices to inflate by 112 per cent leading the country into a famine.[8] The life savings of the Lebanese people were devalued to nothing. Over 90 per cent of Lebanese consumption is imported using the US dollar, including the fuel required to power the country’s hospitals and emergency response to the blast. Businesses are closing down, and those who remain in operations are paying their employees 30 to 50 per cent of their salaries.[9] In short, what was equivalent to a US $2,000 salary now has the purchasing power of US $400. This, among many other factors, has impacted the Lebanese people’s life immensely to an extent that by the end of this year, an estimated 75 per cent of the Lebanese population will be classified as living below the poverty line.[10]

Once known as the Switzerland of the Middle East, the country is now fighting its greatest battle for sovereignty and autonomy.[11] It is a battle which will determine Lebanon’s identity and a choice between democracy and totalitarianism. Furthermore, due to US sanctions on the neighbouring country of Syria, and due to the alliance of a domestic terrorist organization with this country, US dollar, fuel, flour and vital resources designated for Lebanese citizens have been smuggled on to this country and became scarce in a matter of a few weeks, adding to the risk of an inevitable famine by the year’s end.[12] Fuel shortages cause interruptions in the electric power affecting every aspect of daily life. Whereas before October 2019, citizens in Beirut received 21 hours of electric power a day; they are barely receiving 6 to 9 hours of electric power now, and at times electric power may be unavailable for days at a time.[13]

In a matter of few months, corrupt politicians and armed terrorist groups have turned whatever was left of the ancient Phoenician/Lebanese legacy into a failed state. The land which created the purple dye,[14] the land of the Phoenix,[15] the land which invented the alphabet[16] and introduced the first press in the Middle East,[17] the land of ancient civilizations and the bridge between the east and the west, the land of Gibran Khalil Gibran[18] is at severe risk of losing its identity.

To add pressure on the population and on the free press, the president of the republic signed a law which prohibits the criticism of any public figure, especially the president through any media including social media.[19] Newspapers and publishing houses are currently under scrutiny and are prosecuted by the government for the slightest of reasons. Journalists and regime opponents are chased and arrested - a practice which has previously resulted in the assassination of prominent campaigning journalists such as Samir Kassir[20] and Gibran Tueni.[21] The role of the media under such a regime is minimized in order to stifle public opinion and to silence the Lebanese people, who after 40 years of civil war decided to establish a state based on civil law instead of tribal-militia laws. The fight is hard: however, with the help of the international community, confidence will be restored to Lebanon and this group of failed corrupt armed politicians will be history.

[1] Miriam Berger and Laris Karklis, 9 Aug 2020, How the Beirut blast compared with similar explosions in Texas, China and France. Available at: https://www.washingtonpost.com/world/2020/08/09/how-beirut-blast-compared-with-similar-explosions-texas-china-france/

Also, Kenza Ouazzani, 10 Dec 2019, Layoffs, lower wages: employees in the private sector are victims of the crisis in Lebanon. Available at: https://www.lorientlejour.com/article/1198052/layoffs-lower-wages-employees-in-the-private-sector-are-victims-of-the-crisis-in-lebanon.html

[14]Evan Andrews, 22 Aug 2018, Why is purple considered the color of royalty? Available at: https://www.history.com/news/why-is-purple-considered-the-color-of-royalty

[15] Rita George and Melia McClure, 2019, Out of the Ashes: The Ancient Phoenicians and the Phoenix Rising Legend. Available at: https://archive.puti.org/en/out-of-the-ashes-ancient-phoenicians-and-phoenix-rising-legend/

Also…. Aya Majzoub, 2019 “There Is a Price to Pay” The Criminalization of Peaceful Speech in Lebanon [report] Human Rights Watch.  Available at: https://www.hrw.org/report/2019/11/15/there-price-pay/criminalization-peaceful-speech-lebanon#1977

About the author of this article

Lina Chebaro is the Copyright Manager at the Lebanon-based Arab Scientific Publishers, Inc, a family-owned publishing company established in 1987. She is completing her final year of study on the MA Publishing via distance learning at Oxford Brookes University.

Edited by .(JavaScript must be enabled to view this email address) on 06 Oct 2020 around 7am