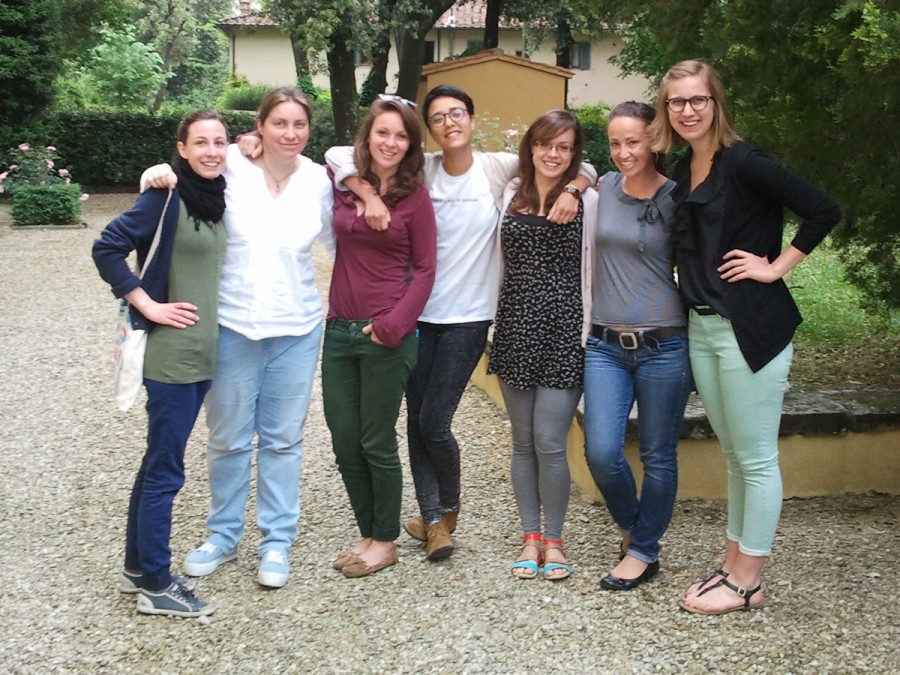 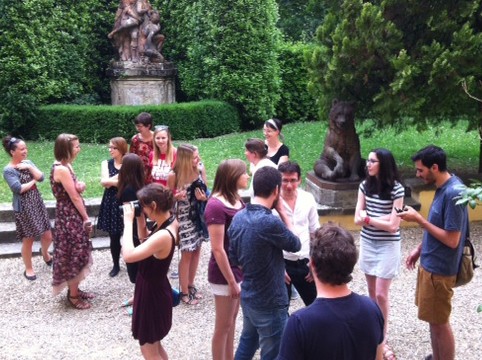 A gathering outside the Villa Finaly 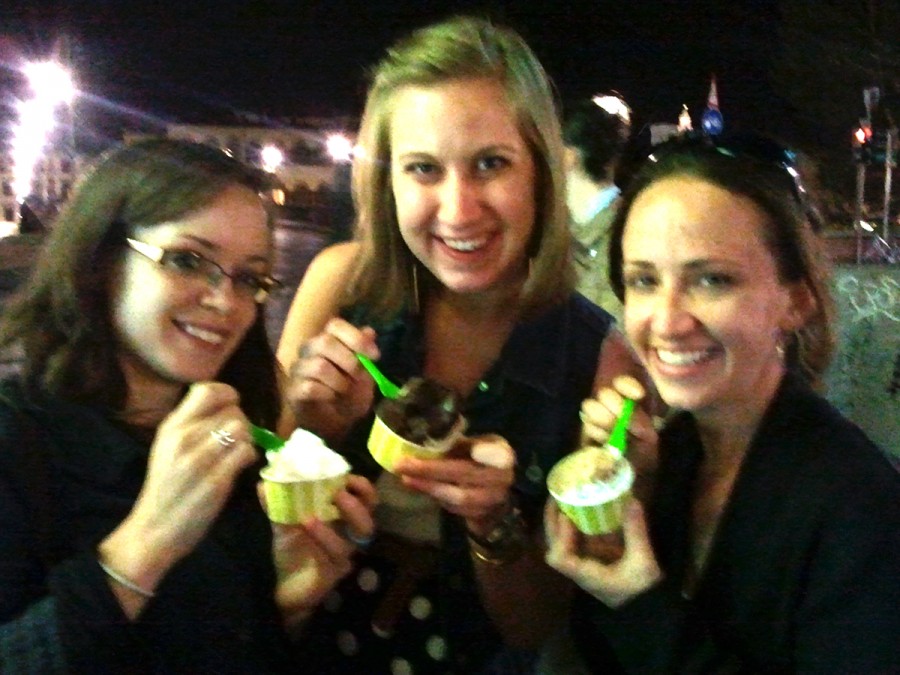 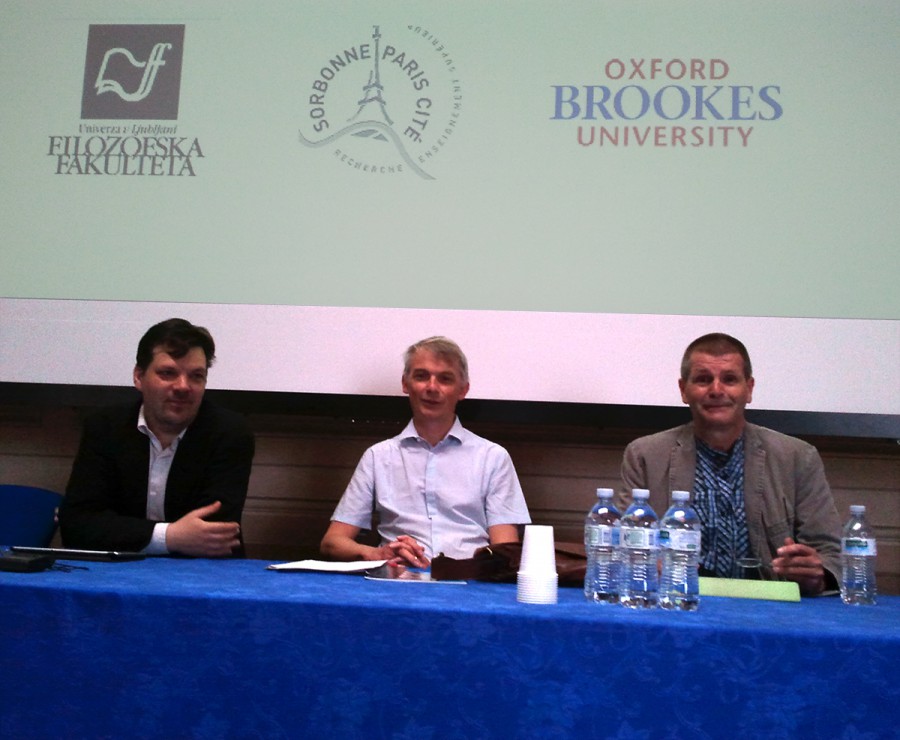 By the Book Conference Panel

There is an Event page for this article

Detailing the experiences of seven Oxford Brookes Publishing MA students spending two weeks in a Tuscan villa at the postgraduate summer school without mentioning gelato or pizza has proved a harder task than one might expect. It would also be a thoroughly inaccurate representation of our intensive summer publishing programme. After deep discussion and some sharp words, the editorial team has removed all unnecessary references to the various culinary ecstasies enjoyed. For a more accurate version, please multiply the pizza by several and the gelato by a multitude.

Or, how we learned to stop worrying and love the gelato

Arriving at the gates of Villa Finaly late on a Sunday night in May, we could hardly sleep for excitement at the thought of explaining Amazon’s dominance of the UK book market to our European counterparts from Paris, Ljubljana, Milan, Leipzig, Leiden and Liège. Publishing geeks to the core, we were genuinely thrilled to spend our first full day in Italy trading factoids with students from universities across Europe. Who knew the Belgian publishing system is split entirely between Wallonia and Flanders? And remember bibliobuses? Still alive and thriving on the continent (we’re jealous). Surprised by the antipathy in France towards ebooks? Well … No, not really. But still – fascinating insights into the different European markets, both culturally and economically.

After a few rousing words about the importance of European solidarity, we divided into our workshops and got right down to some serious publishing brainstorming. Free Knowledge 2.0 were plunged straight into the depths of an existential crisis (What is Free? What is Knowledge? Who am I?). Open Access hit the ground running with a strong theoretical background and a burning desire to make OA hip and trendy to the masses. The Textbooks workshop weren’t sure whether they even wanted to work as a group, but quickly established that eight brains were better than one no matter which way you looked at it. And Brookes lecturers Adrian and Sheila charmed their Home Reference group so successfully it took them a full week to recover. When they did come round, it was to conceptualize the most innovative of magazines for hip young urbanites lining their nests.

The morning lectures set the tone for the day, with talks from each of the attending university professors. Special mentions must go to Brookes lecturers Beverley, Sheila and Adrian for allowing us to bask in their reflected glory, as our European peers congratulated us on having such brilliant and interesting lecturers (we know). Afternoons were spent conducting and compiling research and presenting our findings to our supervisors. The breaks soon became fertile discussion time for sharing ideas (and cake) with the wider group and learning about the progression of debates in other areas.

The two weeks flew by, culminating in a compelling afternoon of presentations by each of the four groups. It was proved beyond all reasonable doubt that the future of European publishing is very much in safe hands. Open Access stole the show, clarifying the issues inherent within a complex subject and judged worthy of professional note by Brookes Publishing Director Angus Phillips himself.

The final day marked the beginning of a European publishing conference, By the Book, and the end of a truly intensive learning programme. Challenging, enlightening, at times frustrating, but ultimately – truly rewarding.

Activities outside the villa were wide ranging and varied. Florence itself charms and delights, and is ideally located short train rides away from Siena, Bologna, Pisa and the coast. Host to a plethora of churches, art galleries, restaurants and lively bars, the city is one to which we would all unanimously return, although finding ourselves similarly luxurious lodgings will be difficult.

Our hearts heavy, we were obliged to flee the city before Kimye’s wedding madness took hold, leaving Angus to represent all things digital and books on our behalves. We were due back North (West).

Edited by .(JavaScript must be enabled to view this email address) on 05 Jun 2014 around 12pm