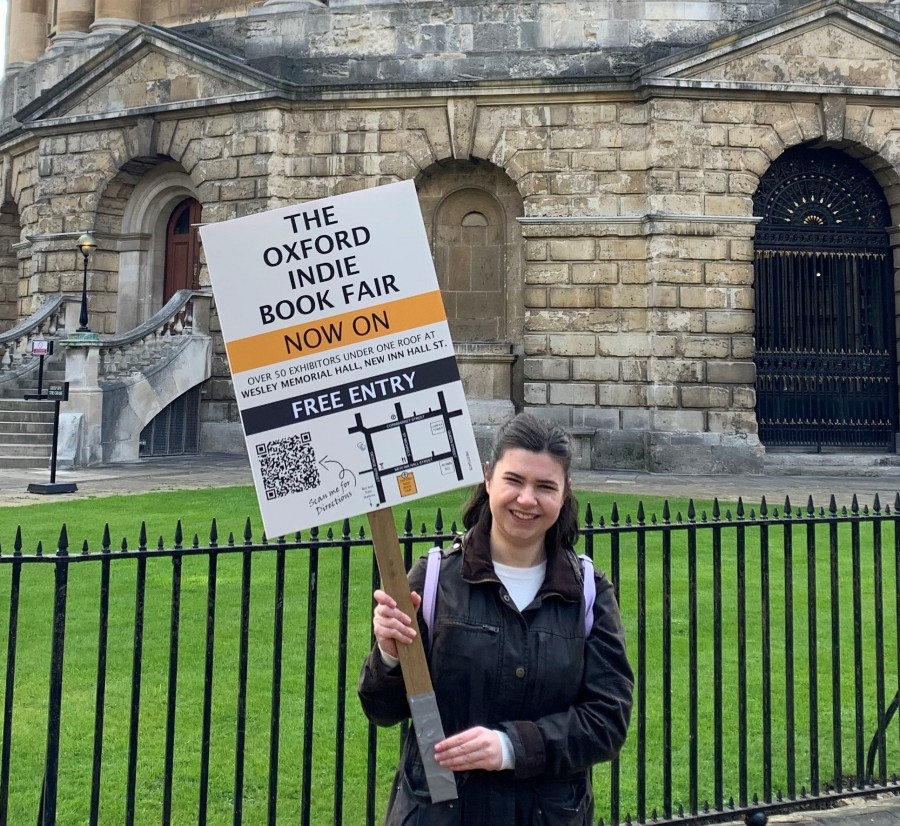 Behind the scenes volunteering at a book fair

This semester, Oxford Brookes publishing students volunteered at some of the most anticipated annual events in the publishing calendar, including the Oxford Literary Festival, Oxford Indie Book Fair, and the London Book Fair.

Celebrating its 25th year of festivities after a two-year hiatus, the Oxford Literary Festival 2022 (OLF) was partnered with the Financial Times, the University of Oxford, and the BBC World Service Radio to deliver over 240 literary events across the historic city of Oxford.

Brookes students were able to volunteer directly with the Oxford Literary Festival team or as booksellers for the iconic Blackwell’s of Oxford, gaining invaluable, first-hand experience of the work that goes on behind the scenes of a literary festival.

Highlights from week one of the festival included a discussion with Charlie Higson, author of the Young Bond series, about his new adult crime fiction title, Whatever Gets You Through the Night. There was also a fascinating interview by author Simon Mason with Lucy Atkins about her new Oxford-based crime novel, Magpie Lane, and a talk from evolutionary biologist Professor Richard Dawkin.

Weekends at the festival are always child-friendly, and this year there was a celebration of 25 years of Harry Potter. But a definite highlight was author Lemony Snicket sharing insights into his new book, Poison for Breakfast, which is described as, ‘a book for curious adults and children alike’.

Dame Jacqueline Wilson’s discussion of her new fiction for Young Adults, Baby Love, packed out the Sheldonian Theatre, while best-selling author and social activist Onjali Q Raúf’s segment exclusively for school children, touched on a discussion of current refugee crises along with the topics of homelessness and poverty. This particularly struck a chord with the year five class at Larkrise Primary School, Oxford, who tweeted: ‘She was warm, engaging, and inspiring. [She] kindly signed a whole class-worth of her books for us!’ (@larkriseprimary).

One of the big names of the week was bestselling novelist Zadie Smith who hosted a lecture on conscience and consciousness. Alec Russell, Editor for the Financial Times Weekend, praised Smith on Twitter as the, ‘...highlight of the weekend [,] inspiring as ever in her lecture on so much that matters including the need for clarity’ (@AlecuRussell).

Meanwhile, the Weston Lecture Theatre saw Xiaolu Guo, an award-winning Chinese-British novelist, essayist and filmmaker discussing her work for this year’s featured China Lecture with Angus Phillips, Director of both the Oxford International Centre for Publishing (OICP) and the Oxford Brookes Confucius Institute. You can read a review of Guo’s talk over on the OICP course publication, Hybrid Magazine.

The Weston also hosted an African literature and culture panel featuring former publisher James Currey, Haitian politician Dr Claude Joseph, academic Onyeka Nwelue and writer-director Nk’iru Njoku. Chaired by Dan Hicks, the four discussed the promotion of African and Caribbean voices by the Africa-focused James Currey Publishing, and the work it does with the African Studies Centre at the University of Oxford. Emmanuel Ikechukwu Umeonyirioha, lecturer and scholar at the University of Oxford, tweeted about the panel: ‘I listened to Dr Claude Joseph talk at the Oxford Literary Festival and was moved by the intelligence which he naturally exudes. His presentation was as riveting as the issues which he brought to the attention of his audience." (@lordibmbomb).

As the crowds left the Oxford Literary Festival, student volunteers directed them to the Wesley Centre for the Oxford Indie Book Fair, which hosted nearly 50 exhibitors. It also sold books from local authors and publishers including Oxford Brookes' publishing alumni, Aleida Gomez de Caso of Peculiar Press, and John Buckley, the artist who crafted the Headington Shark.

Only a few days after the festival and fair finished in Oxford, Brookes’ OICP publishing students headed to the London Book Fair at Olympia London as volunteer helpers. Transformed into a theme park for publishers, a colourful array of bookstands filled the huge space. The first London Book Fair since 2019, it aimed to reunite the publishing community ‘for three days of business, networking, and learning’.

Covering all sectors of the industry from children’s to academic and scholarly publishing, as well as rights and illustrations. Students were stationed at various venues across the exhibition centre. The best spot to work at was the Olympia Theatre where students could sit in on talks covering the current climate of publishing, panels on translations, empathy-building stories emerging from the Baltic States, and sustainability in children’s literature.

Gathering for a panel talk on how the industry can better represent traditionally marginalised narratives in children’s literature, was Farrah Serroukh (CLPE), Indigo Williams (BookTrust) and Marssaié (KnightsOf). Meanwhile, The Great Dream Robbery and Kid Normal writers Greg James and Chris Smith were there for the Children’s Authors of the Day talks.

The whole week at London Book Fair was a vibrant, bustling and nourishing experience for all that attended, and not least because we were able to listen to a talk by Maggie O’Farrell, the Women’s Prize-winning author of Hamnet.

During this amazing month of volunteering, every single industry member we met was friendly and supportive to the publishing hopefuls at Oxford Brookes University. We finished with a real sense of hope and excitement for our future.

Edited by .(JavaScript must be enabled to view this email address) on 03 May 2022 around 2pm